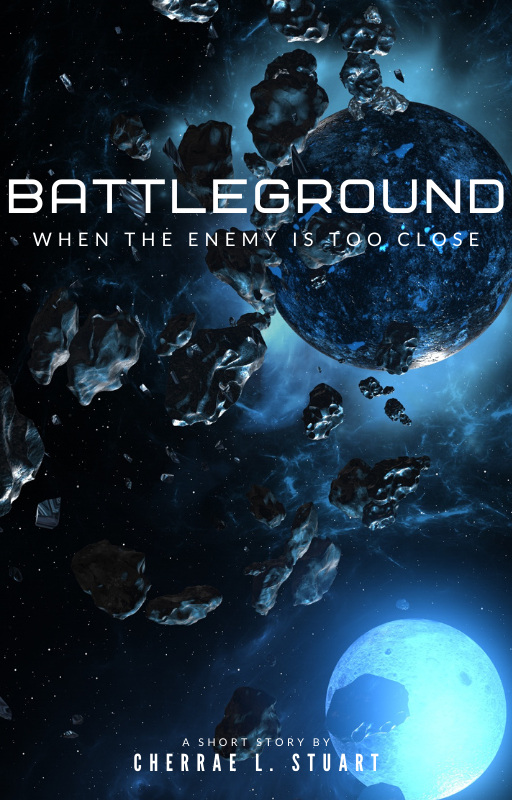 Aletha shielded her eyes as the sky exploded. A thunderstorm of sparkling jewels broke, as the two ships collided in a death waltz that would consume them both. She slung her blaster over her shoulder and trudged up the hill. She’d have to be quick. There might be something valuable amongst the debris and the enemy’s sweepers would follow, leaving nothing behind but ash. Every piece of her armaments, she scavenged from cooling battlegrounds or picked from fallen comrades before they were taken up. Her scarred helmet belonged to her brother Calef. The battered breastplate, her father’s. She took her boots off the feet of her next-door neighbor’s youngest son whom she used to babysit. They swallowed his small pre-adolescent feet, pulled free easily and were just her size.

She remembered how in the olden days-those sweet pink years before the war-when her father had refused to let her enlist. The battle would come, and her brothers would fight it. Tradition, terrestrial decorum, and centuries of rules had colored his perceptions. How could he know then that when the war landed, the terrible-faced enemy finally come from the skies, that none of these things would matter. Young and old, the weak and the poor, the rich and the strong, they would all of them fight, or they would die. So, they fought. Most died anyway. Cut down with honor and defiance but cut down all the same.

Her proximity meter chirped, rousing Aletha from these ghosts of the past. The stern face of her father protested momentarily, eventually fading before the imminent needs of survival. He would have time to haunt her later, when she laid her head to rest.

She’d stopped moving and crouched in a defensive position, blaster at the ready, before she’d even fully registered the muted warbling from her wrist. Her body on autopilot, primed for war. She would not be cut down, her body taken up by their enemy with the face they dared not look upon. The children called them Teesha, after the nightmare demon of stories. Its gaze would paralyze you with fear, making you more delicious before it ate you. Now there were no children left, all devoured by the demon of war.

Fear outweighed her curiosity which was considerable. In another life Aletha was a walking question mark. She sampled every flavor before making her choice. She insisted on awkward sticky fumblings with potential suitors before dismissing them as not to her liking. Never satisfied with other’s rote explanations and vague reasonings, she kept her own counsel and made her own decisions based on experience, never word.

Battle hardened and weary from the constant surges of fear, she was filed down smooth and sharp, an economy of spirit. War quenched her once raging curiosity. Barely an ember of the girl she once was, remained. With a trembling forefinger she lowered her protective visor over her eyes. It took many thousand casualties before they realized that to even look upon the visage of this enemy meant madness and death. The modified visor changed vision from light and color of natural sight to waves of energy emitted by the world around. Comrades glowed a deep red with yellow around the edges on the now black and grey landscape, while the enemy glowed a brilliant blue, for they emitted no heat. A deep unsettling cold washed over battlefields as they brought with them the very ices of hell with each step.

She swept the landscape, trying to distinguish the waning heat of dying bodies from the flickering reds of spot fires, keeping an eye out for warning blues.  If there was only one sweeper she might risk the scavenge. Her supplies were dangerously low. More than one, however, and she would run. No need for curiosity here. Bitter experience taught her this.  One of the enemy could be outmaneuvered. They were clumsy and slow, but more than one and the real threat emerged. They worked together somehow. Moving as a single consciousness.  As if all the enemy pieces on the d’doly board were active all at once.  The more of them there were the more angles they could maneuver, and their numbers seemed to increase daily.

She felt like a bag of rocks, her muscles tight and hard from the constant running.  Impossible to believe she’d ever been soft, ever been relaxed. She couldn’t remember the last time she was full. Loneliness and hunger, twin rats constantly gnawing, left her ragged and hollow. Aletha methodically scanned the crash site.  No blue spots yet, but plenty of waning reds bloomed in her visor.  The wilted flowers of the cooling dead, and soon-to-be dead, dotted the field.  She headed to the brightest of these.  It was possible-unlikely, but possible-she could save a comrade’s life. Or at least put them out of their misery.

As she reached the body, the outline was unmistakable.  Aletha’s heart skipped with hope. They glowed a brighter red than they should’ve if they were on the threshold of death. Perhaps she could save someone today. She raised her visor to better inspect the damage.  Bile flooded her nose and mouth and she gagged, grateful she hadn’t eaten in a couple of days. The sweet acrid stench of burnt flesh assaulted her.  Her eyes watered from both the smoke and emotion.  There was nothing to be done here.

The hairs on the back of her neck stood at attention as a sudden chill oozed up her spine.   The heat from the burning body in front of her accentuated the deep cold spreading across her back.  Without thinking, Aletha whirled around, blaster at the ready, collapsing her entire world with this one careless action.

She stared at the Teesha, unable to move, unable to process what she was seeing. It’s mottled greyish green skin. It’s huge lumpy head, the cold that radiated off of it in frosty waves, were all horrible to behold, yes. But nothing could have prepared her for the creature’s eyes.  Staring down at her, with what could only be recognition, were the unmistakable eyes of her father.

Her father who had fallen in battle and been taken up, sacrificed himself to save the life of his children, who’s laugh was sweet and clear as an autumn day was staring down at her from the face of a monster.  Tears flowed from his eyes as he raised his weapon.  The Teesha weren’t unfeeling killing machines.  They were much more horrific.  Their loved ones, fallen and taken up.  Allowed to see and recognize the damage they wrought, but unable to stop it.

Her residual curiosity sated, all questions answered.  She now understood why they were cold, how their numbers increased so rapidly, and why to look upon them brought madness.  Aletha closed her eyes, welcoming death.

One thought on “Battleground”

Unauthorized use or reproduction of this content in any form is strictly prohibited without written consent of this site’s author.  Excerpts and links may be used, provided that full and clear credit is given to Cherrae L. Stuart with specific direction to the original content.

This is where I talk about my writing, mostly.

Look at the Trees

Thoughts about movies and other various things, from a quirky Aspie.

A work in progress

Dive straight into and get lost in these short stories!

Author of the Ace Carroway Series